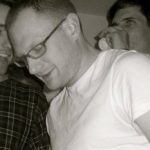 Stephen has been dancing for over 10 years. He spent many years obsessed with his new hobby until he went to circus school in 2009. Then he was torn between swing dance and circus so ended up pursuing both. While David grew the swing scene in Bristol, Stephen came up with ideas of how to share the joy of the dance with the circus community and vice versa. This first took place at The Swing Thing extravaganza in 2010, quickly followed by several Bristol Swing Festivals. The cabaret element of BSF has ventured beyond Bristol to events including Glastonbury Festival Big Top and a run at the Edinburgh Fringe.